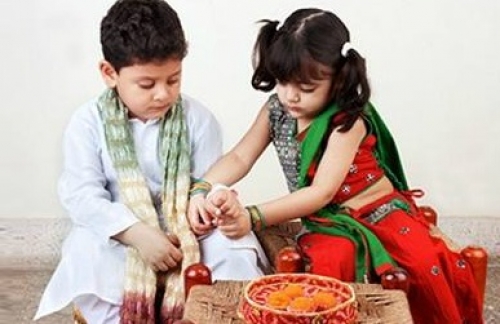 Raksha Bandhan is a festival that is all about affection, fraternity, and sublime sentiments. Like all other Indian festivals, Raksha Bandhan is the celebration of togetherness, of being one of the family. This is a special festival to symbolize the love between a brother and a sister. The festival is made up of two words, namely "Raksha" and "Bandhan." As per the Sanskrit terminology, the occasion means "the tie or knot of protection" where "Raksha" stands for protection and "Bandhan" signifies the verb to tie.

The occasion of Raksha Bandhan is celebrated on the full moon day of the Hindu lunar calendar in the month of Shravana which typically falls in the August month of the Gregorian calendar.

Raksha Bandhan is known to have originated centuries before and there are several stories related to the celebration of this special festival. Some of the various accounts related to the Hindu mythology are -

Indra Dev and Sachi- According to the ancient legend of Bhavishya Purana, once there was a fierce battle between Gods and demons. Lord Indra- the king of devas was fighting the battle on the side of the Gods and was having tough resistance from the powerful demon King, Bali. The war continued for a long time and did not come to a decisive end. Seeing this, Indra's wife Sachi went to Lord Vishnu who gave her a holy bracelet made up of cotton thread. Sachi tied the holy thread around the wrist of her husband, Lord Indra who ultimately defeated the demons. The earlier account of the festival described these holy threads to be amulets that were used by women for prayers and were tied to their husbands when they were leaving for war. Unlike, the present times, those holy threads were not limited to brother-sister relationships

Yama and the Yamuna- Another legend says that the God of death, Yama did not visit his sister Yamuna for a period of 12 years who ultimately became very sad. On the advice of Ganga, Yama went to meet his sister Yamuna who has very happy and performed hospitality of her brother, Yama. This made the Yama delighted who asked Yamuna for a gift. She expressed her desire to see her brother again and again. Hearing this, Yama made his sister, Yamuna immortal so that he could see her again and again. This mythological account forms the basis of a festival called "Bhai Dooj" which is also based on the brother-sister relationship.

Krishna and Draupadi- Based on the account of Mahabharat, Draupadi, wife of Pandavas tied a rakhi to Lord Krishna while Kunti tied the rakhi to grandson Abhimanyu before the epic war.

There is lot of confusion this year about Raksha Bandhan Muhurat because of Bhadra Incorrect explaination and position on 11th. There is no Bhadra on 11th of Aug this year. Below is the detailed explaination about Bhadra at the end of this blog.

In 2022 Raksha Bandhan should be celebrated on 11 August, Thursday this year. Reasons are as follows:

1) Moon will be in Shravan Nakshatra on this day.

3) Bhadra is not there on this day as it is in vishti but with Capricon sign. (Detail of Bhadra is explained at the end of this post)

Previous in Pooja
Next in Pooja

Karva-Chauth (The fast of Faith and Love)